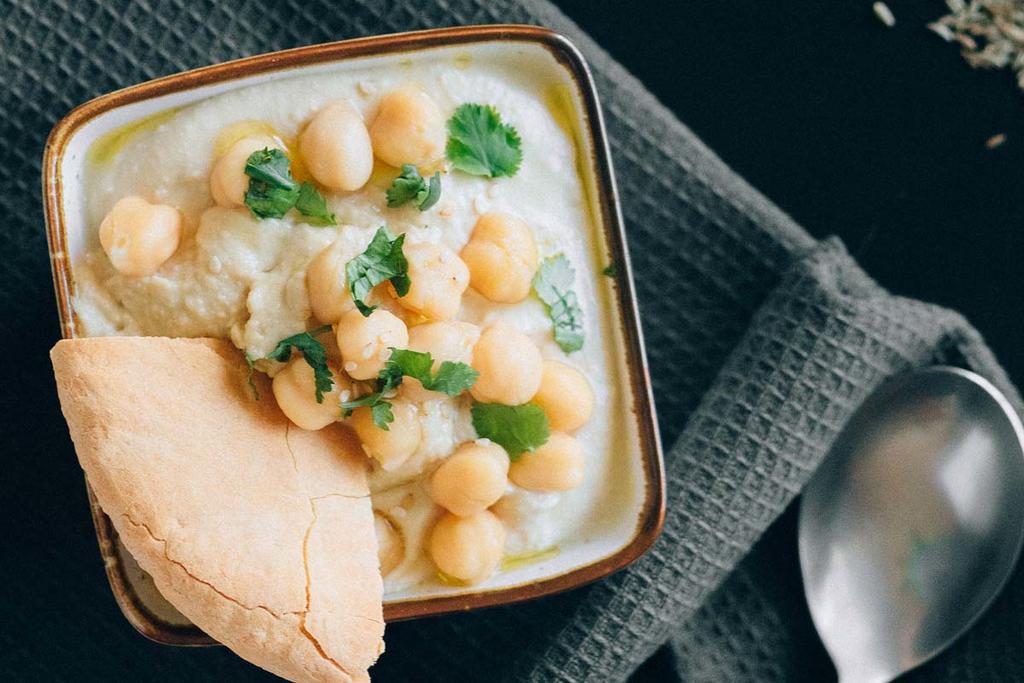 In this new pictorial series, I will be demystifying the often surprising behind-the-scenes reality, that is: where our ingredients came from before they got to our plates or kitchen cupboards – how they actually look in the garden or the farmers’ field, at the very beginning, before any form of processing occurs. Enjoy part one below! 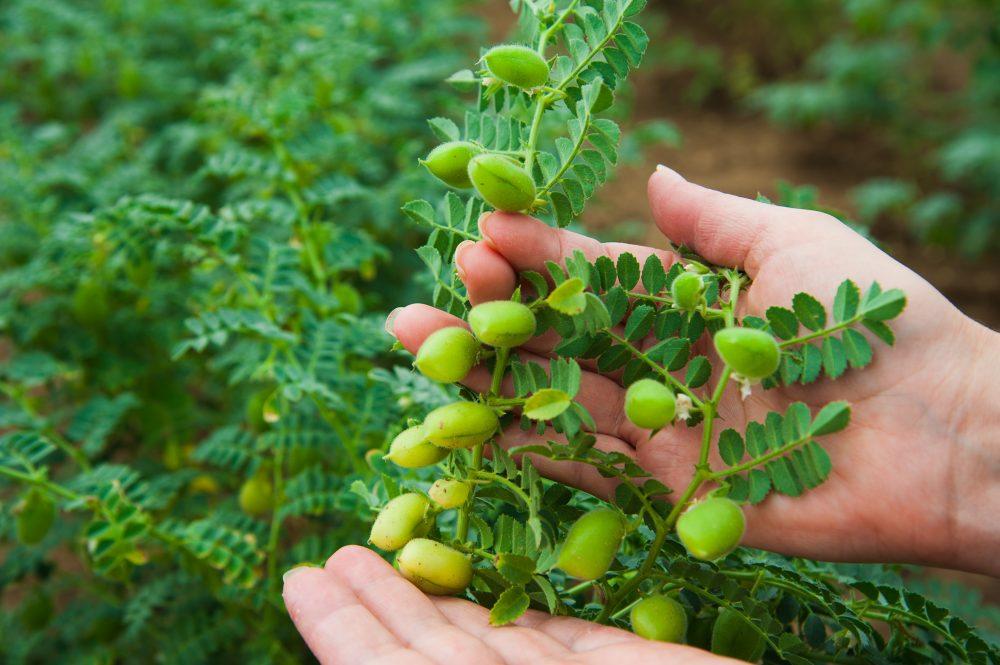 The common chickpea (pictured growing above); adored the world over for its versatility, high caloric value, and when prepared in the right way – its creaminess. Every single chickpea comes from a stiff, green furry pod - with one pod containing only one or two of the peas, hence being on the pricier side for beans. Dried chickpeas (the ones we are all familiar with) are harvested when the chickpea pods are well on their way to being completely dry on the plant. The plant has to already have withered and turned brown for farmers to harvest the pods. They then allow the pods to dry the rest of the way. When the pod is fully dry, the seam splits of its own accord and the seeds can be easily extracted. Some larger farmers help this process along by desiccating the crop on the vine before harvest. The fresh, young chickpeas (second picture below) are the succulent immature green chickpeas taken from the pod. They can be eaten raw or as a vegetable, just like garden peas from the pod. You might even see fresh green chickpeas in farmers’ markets or specialty shops. Fresh green chickpeas are a common sight in parts of India and Turkey, where the majority of chickpeas are grown. 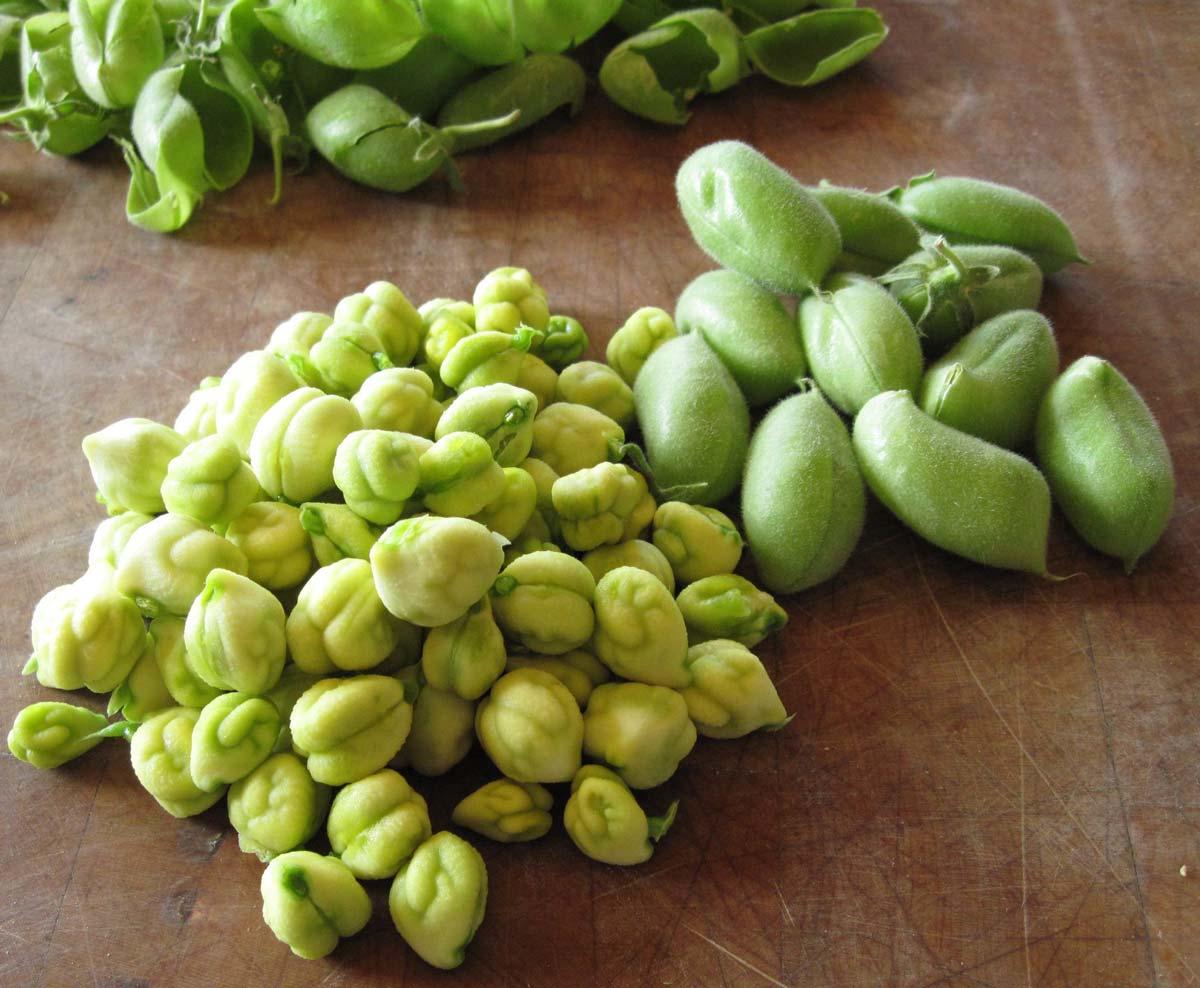 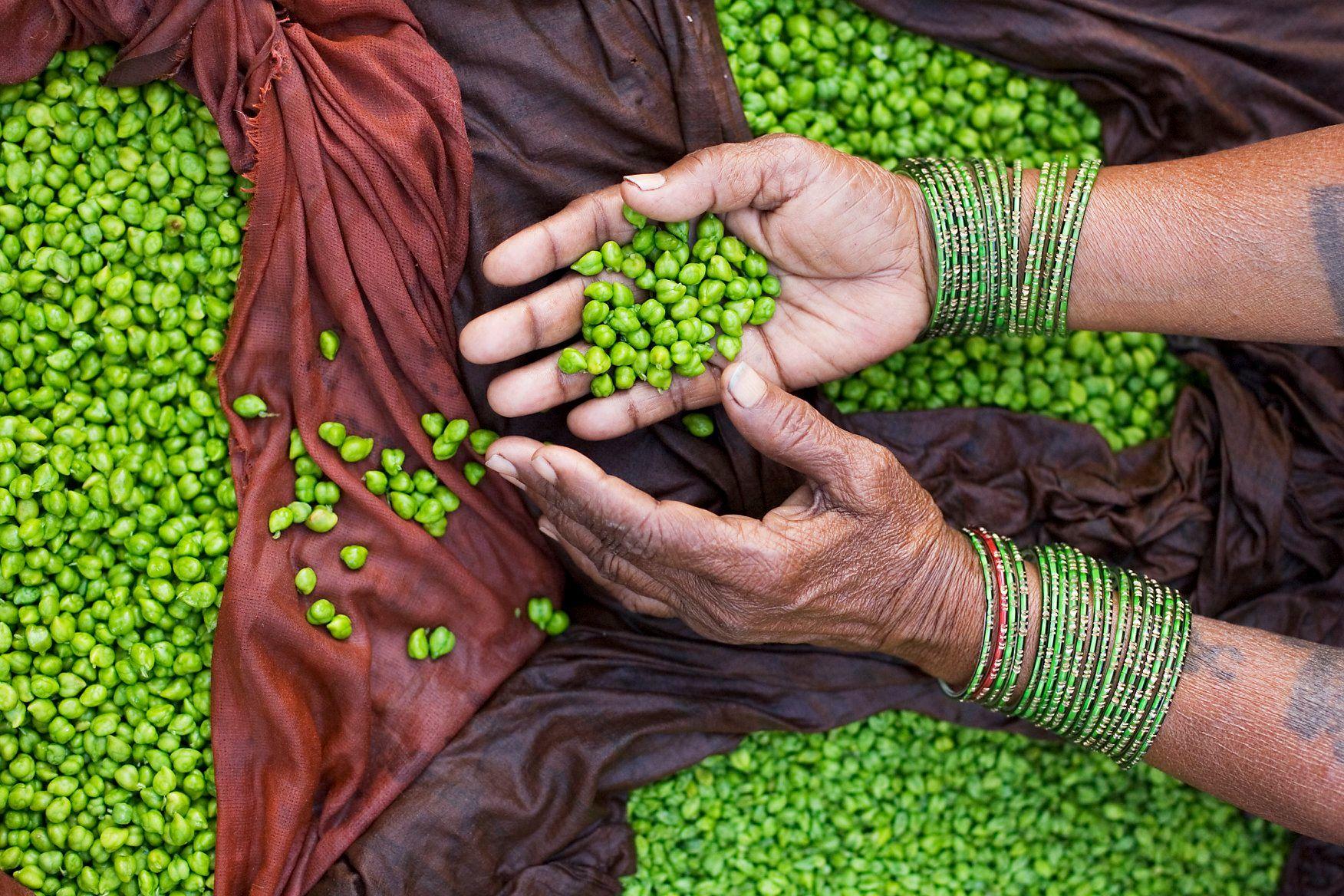 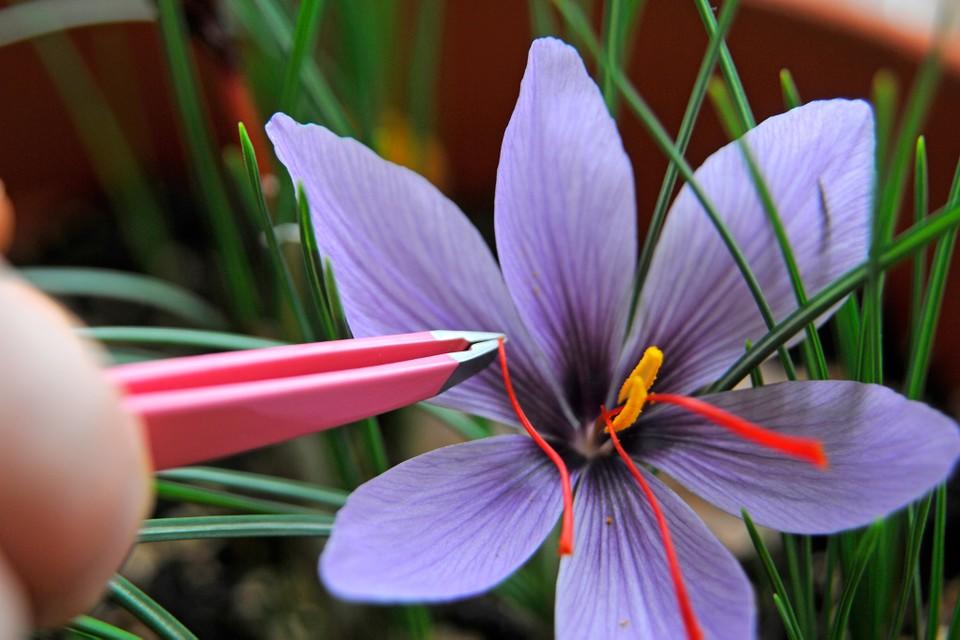 Did you know Saffron comes from a flower? The spice originates from a flower called crocus sativus—commonly known as the “saffron crocus”. The reason why saffron is known as the most precious culinary herb in the world, and the reason a gram can cost you £10+, is simply because every flower only produces 3 threads (stigmas) of saffron. On top of that, it blooms for only one week each year. The saffron must be harvested—by hand—in the mid-morning, when the flowers are still closed in order to protect the delicate stigmas inside. Incredibly, it takes about 1,000 flowers to produce just 30g of saffron. To make sure you’re getting the best stuff, take a sniff—you want saffron that smells a bit like sweet hay. It should also have all red stigmas, no yellow stamens. A delicacy for your organic white basmati rice dishes. 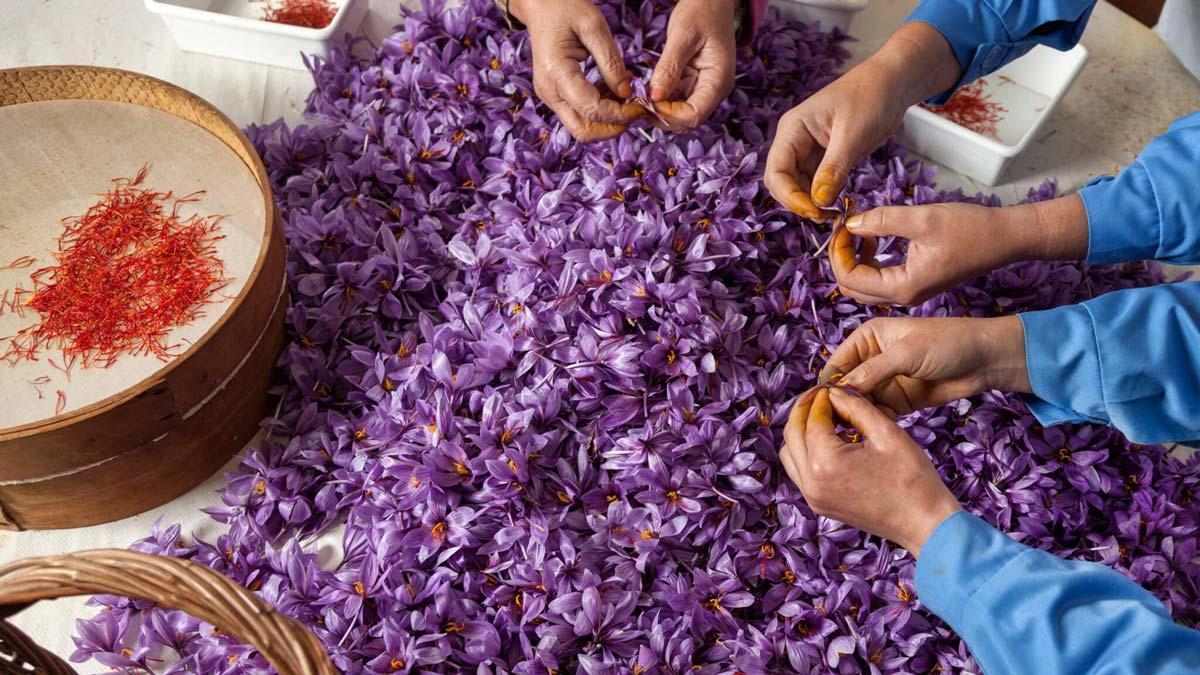 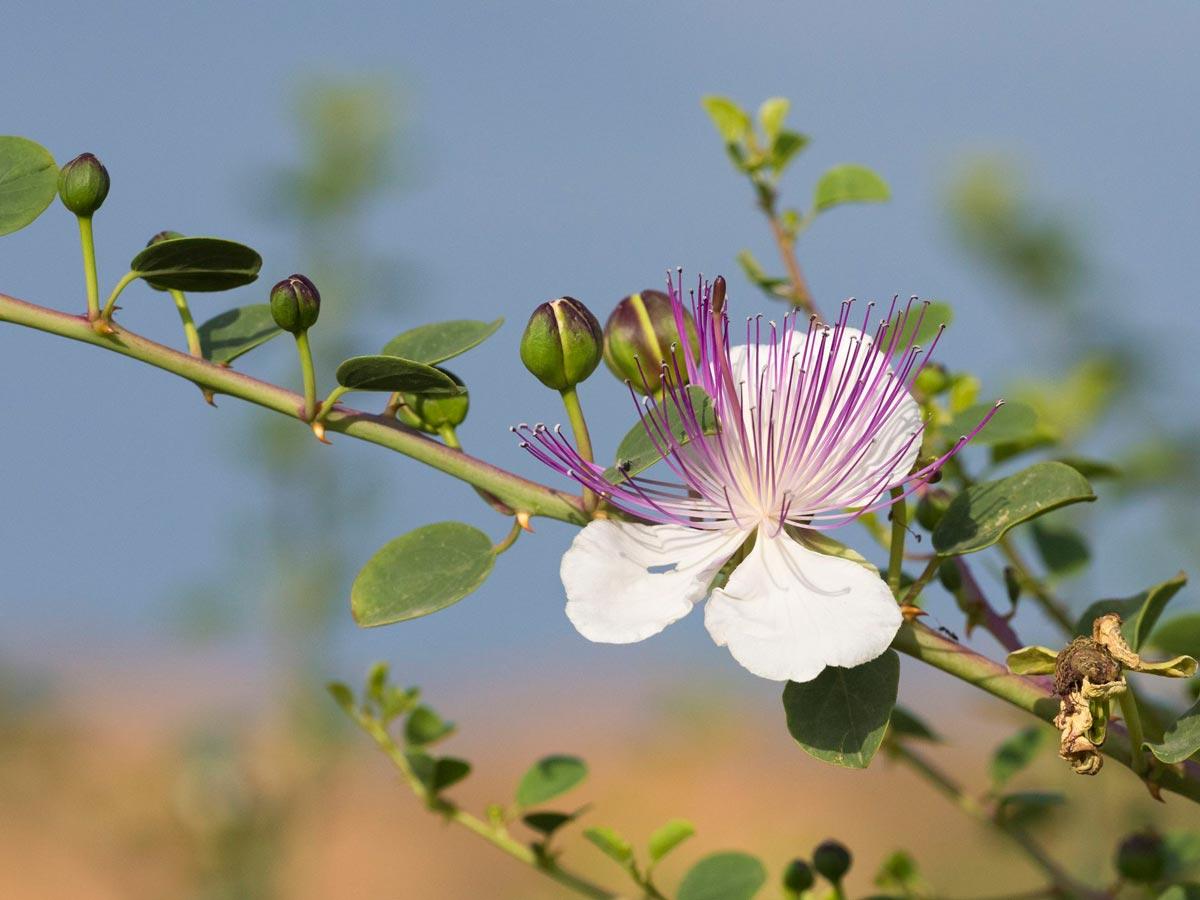 Capers – one of the most revered and quintessentially Mediterranean ingredients after olive oil, are merely the immature flower buds of the caper bush. The grade of capers is determined by the size of the bud, with the smallest size capers (typically below 7mm) commanding the very greatest culinary prestige (the different tiers changing through increments of 2mm), with the largest, least sought after specimens being over 14mm in size – which at that size is probably just an unfurled flower. Capers are typically preserved from the raw, fresh state, either dry in sea salt, or more commonly pickled in brine water, vinegar or olive oil, (perhaps a combination thereof). In the south of Italy, Sicily and the Sicilian islands, the capers are more often dry-preserved in sea salt and not brined. For a high-quality wild capers preserved only in Silician sea salt see here. During the preservation stage, the natural flavor profile of the capers intensifies, and mustard oil (glucocapparin) is released from each caper bud – this enzymatic reaction also leads to the formation of rutin often seen as crystallised white spots on the surfaces of individual caper buds (as you can see below). Capers are the world’s highest source of the longevity-promoting and mood-enhancing phytonutrient Quercetin. 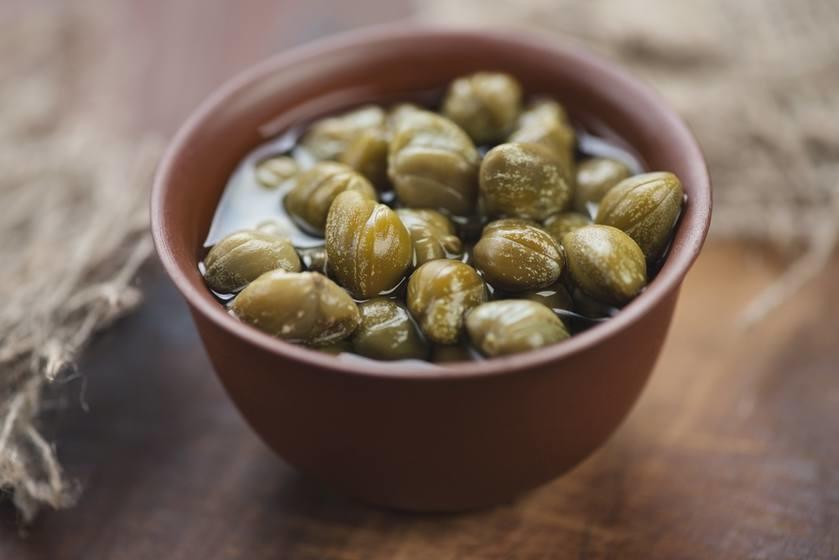 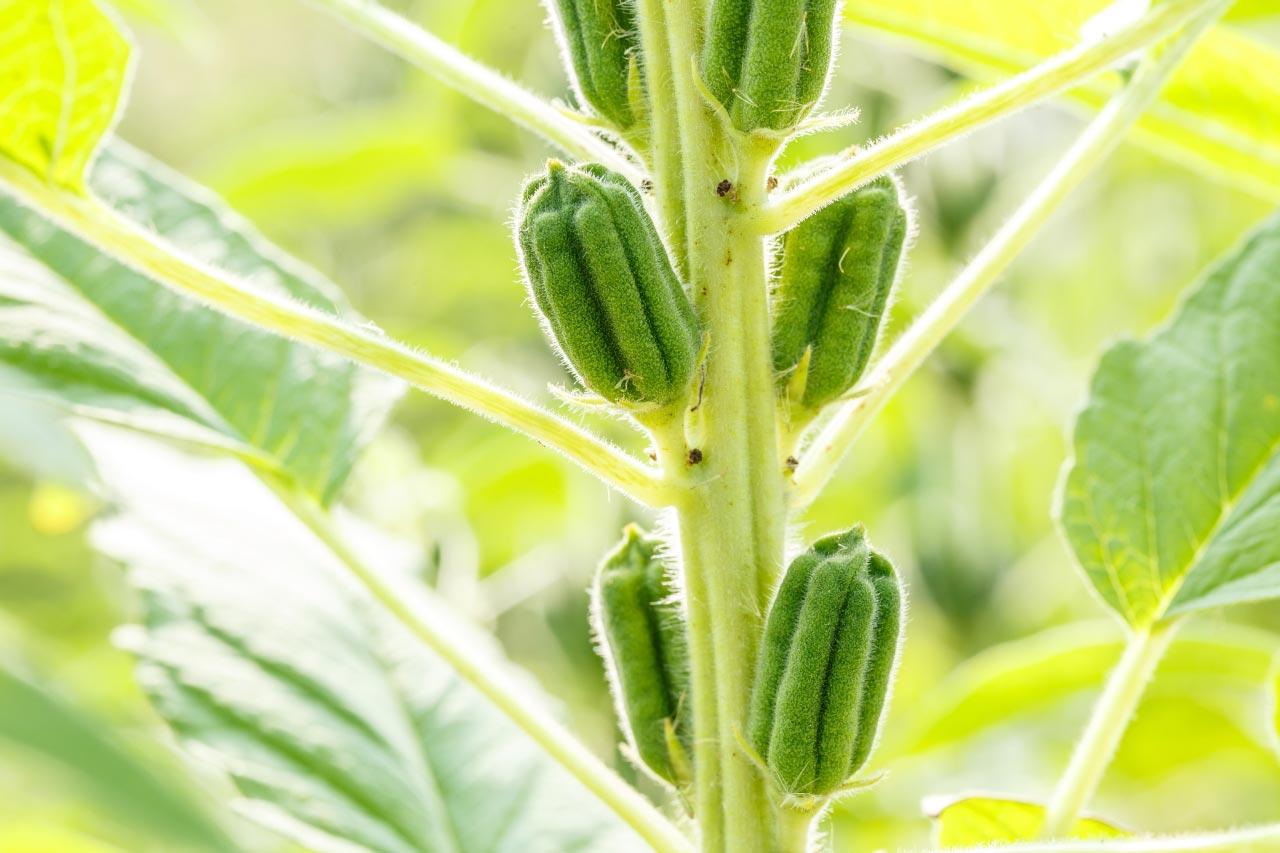 Ever wondered how common sesame seeds grow? They come from a sesame fruit that looks like small okra. Usually the pods are left to dry naturally while on the plant to ensure maximal seed ripeness. When the fruit naturally opens, the seeds are said to be mature. The seeds are usually hulled to reveal their pearly goodness. They are more nutritious when hulled also, as a good proportion of the anti-nutrient is removed in this way. Even when hulled, sesames can come in a variety of colours, from white and black to red, brown and tan. 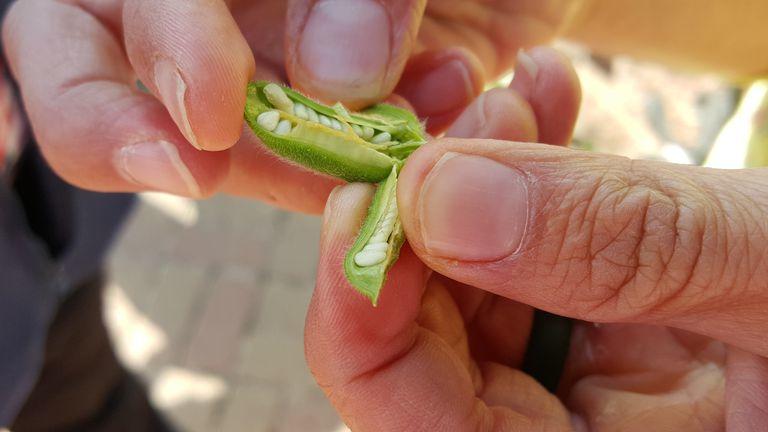 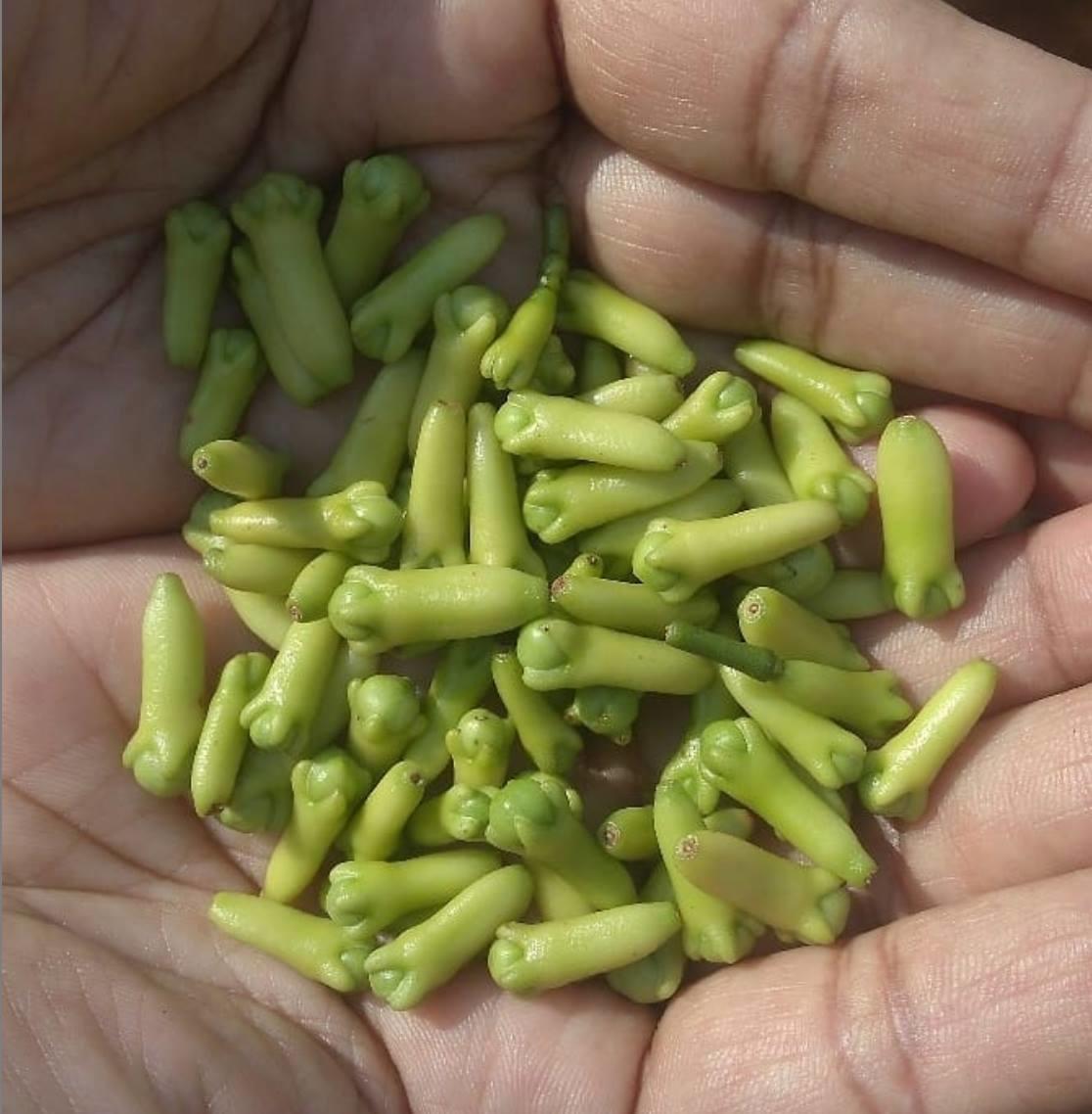 Cloves (see the final picture for its recognisable dried form) is a common spice made from the flower buds of a tropical Asian evergreen tree called, appropriately enough, the clove tree. Just like with capers, cloves are the flower buds harvested in their immature state. Whole cloves are shaped like a small, bulbous spike, usually around 1 centimeter in length. Chances are, you will not have come across fresh cloves unless you have visited a spice garden somewhere in Asia. Cloves can be used whole or ground (it is also a common addition in masala blends) and imparts a very strong, pungent flavor, aroma and warmth. Cloves are thought to be the first spice to be traded and along with nutmeg, were one of the most precious spices of the 16th and 17th century. The medicinal properties of cloves were highly valued by both the Romans and the ancient Chinese. Although much prized in Ayurvedic medicine, this amazing spice is sadly not so widely used in the West. 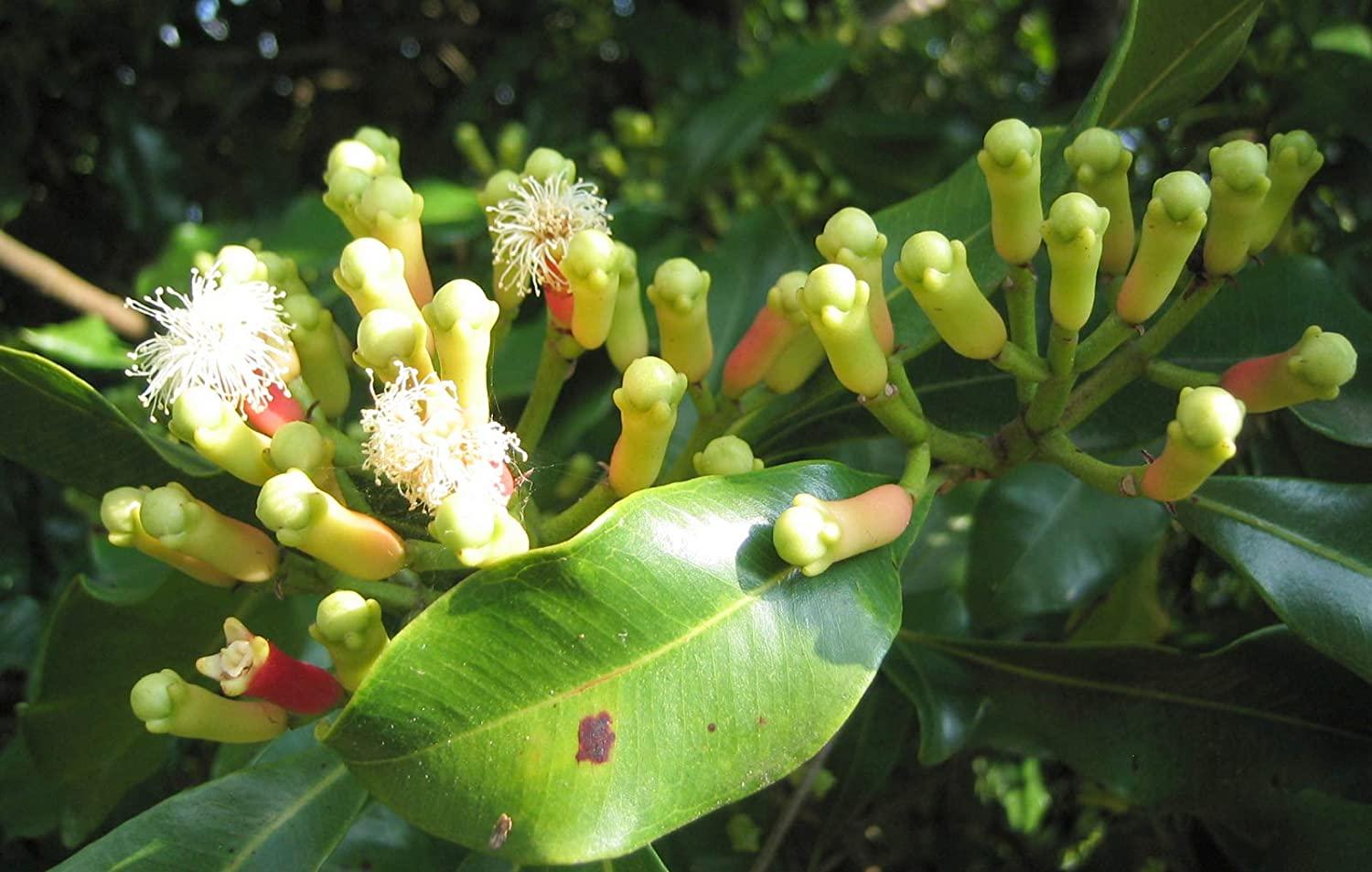 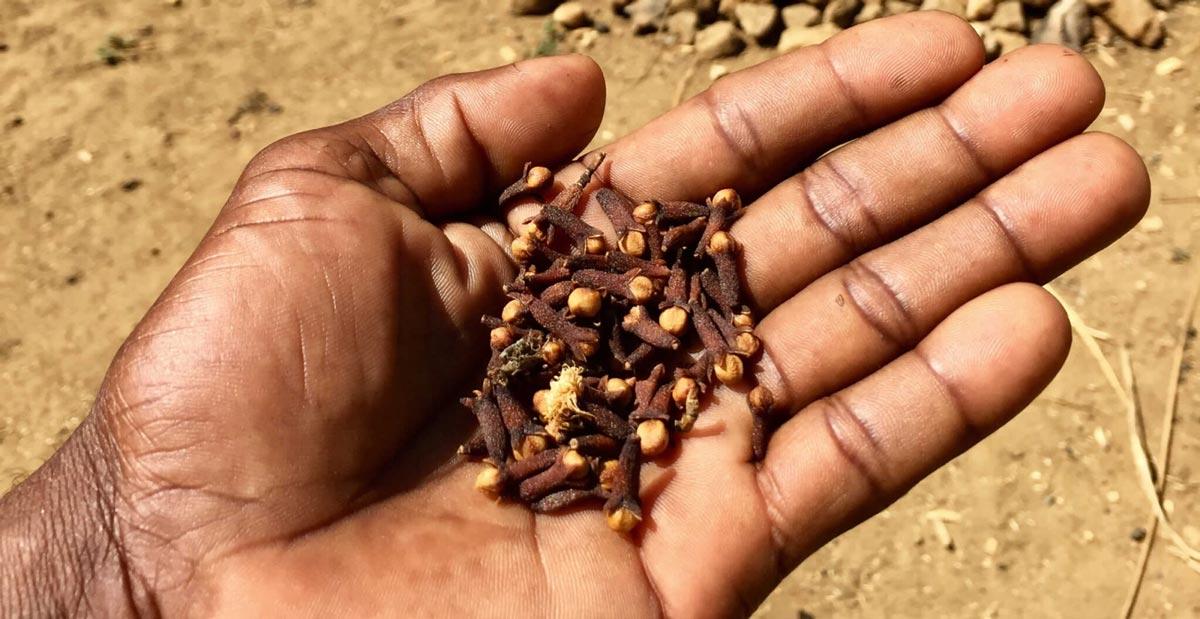