Less than 1% of Brits have tried this Popular Victorian Vegetable 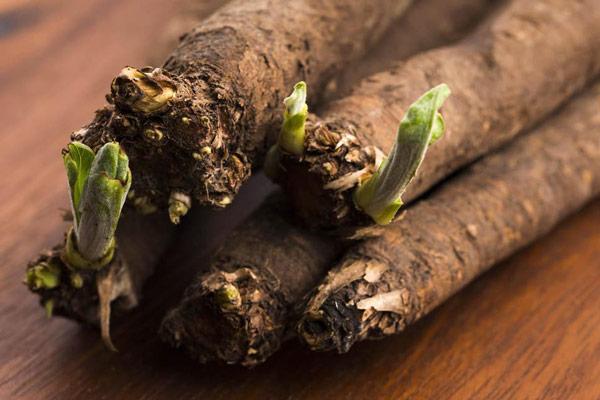 Just as you made the right impression all those years ago by pronouncing quinoa (keen-wah) instead of quin-noah, you won’t want to mispronounce this relatively unknown member of the dandelion (and also daisy) family. Salsify, pronounced sal-si-fee, used to be a popular root vegetable in the 1800s, but in the intervening, 100 or so years it had more or less fallen into the forgotten heirloom bin until a mild resurgence fairly recently amongst high-end chefs and specialty growers. There are two main types of salsify: black and white. Black Salsify is scientifically classified as Scorzonera hispanica and is commonly known as Spanish Salsify, Black Oyster, Serpent root, Scozonera, and Viper’s grass. White Salsify, botanically classified as Tragopogon porrifolius, is known as Billy Goat’s Beard, Oyster plant, Jerusalem star, and Purple Salsify for the lilac flowers that bloom on the plant in the spring. Before it’s popularity in the Victorian kitchen, salsify has been used in European cultures since the Ancient Greeks and Romans. Either type can grow a foot or longer in length and one seed produces one root. 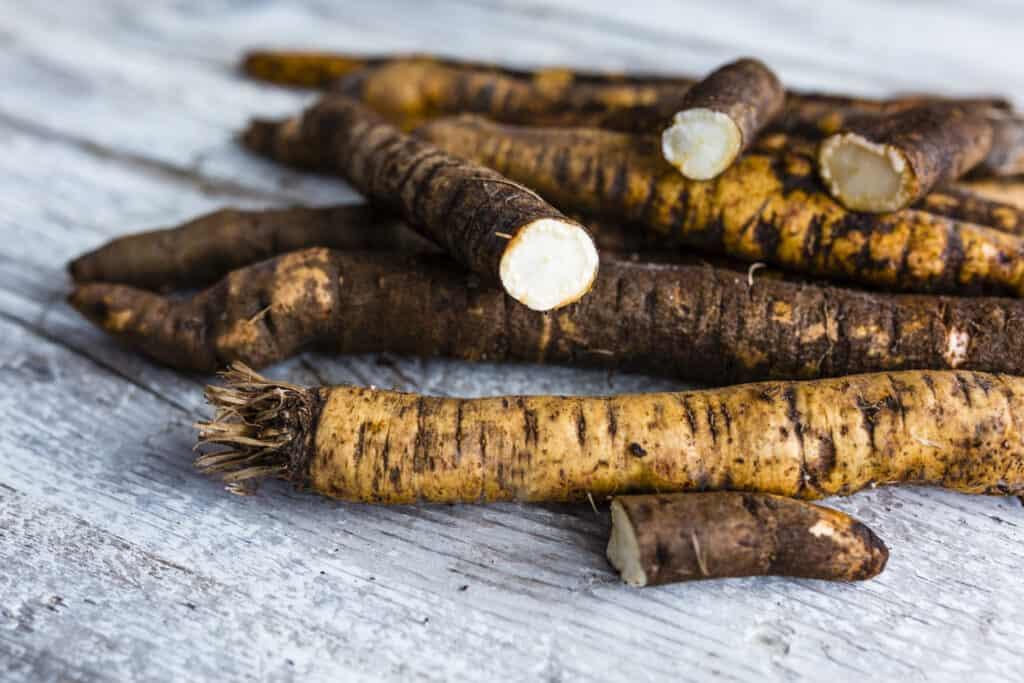 Salsify can be used in more-or-less the same way as any other root vegetable and is an especially good recipe replacement for potatoes or parsnips, or indeed, less starchy vegetables like celeriac or even artichoke or asparagus. The best part is that salsify is better for you than most other starchy root vegetables. These wholesome, skinny roots contain lots of iron, vitamin C, thiamin, magnesium, calcium and phosphorus, and provide a healthy dose of prebiotic inulin fiber (just like Jerusalem artichoke). They also have as much potassium as a banana. Many claim that salsify tastes a little bit like oysters, which is one reason why it’s often called “vegetable oyster.” In truth, black salsify has a mild oyster flavor that makes it perfect for chowder or mock oyster soup. White salsify has a somewhat different flavor, similar to artichoke hearts or asparagus. Try them both and let me know which you prefer. 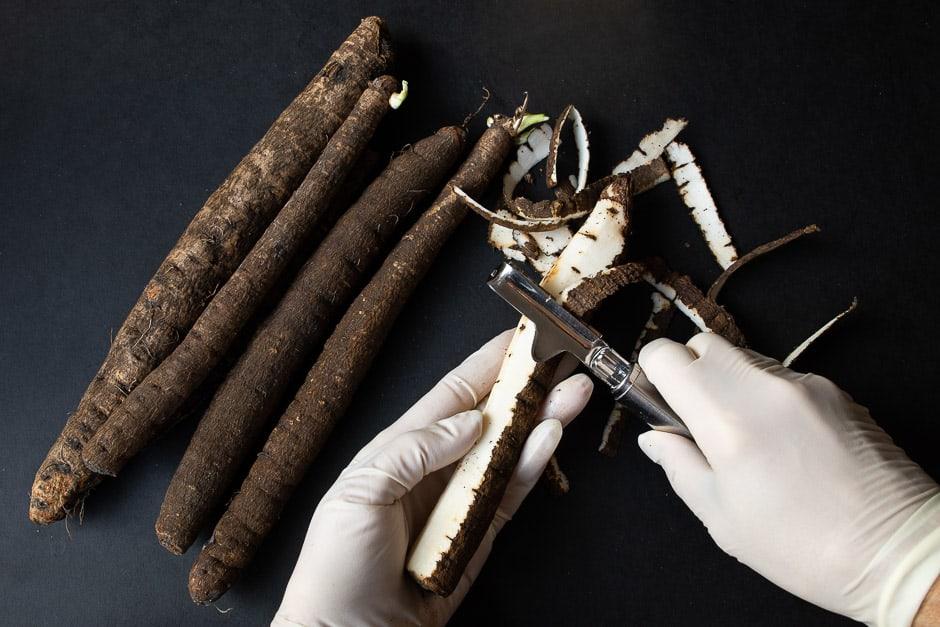 The image above and the two below (highlighting black salsify) are to the credit of German chef, Thomas Sixt, who highly recommends going about the business of skin peeling wearing gloves, as the creamy white root, prior to cooking, is a tad sticky – as per the roots and stems of other members of this family (think the little stream of white latexy milk that exudes from the stem and root of the dandelion). Failing gloves, pre-oiling your hands with coconut or olive oil helps to prevent the stickiness adhering to your hands (a tip I learned that stops the same thing happening when opening up those giants of the fruit world Jackfruit). 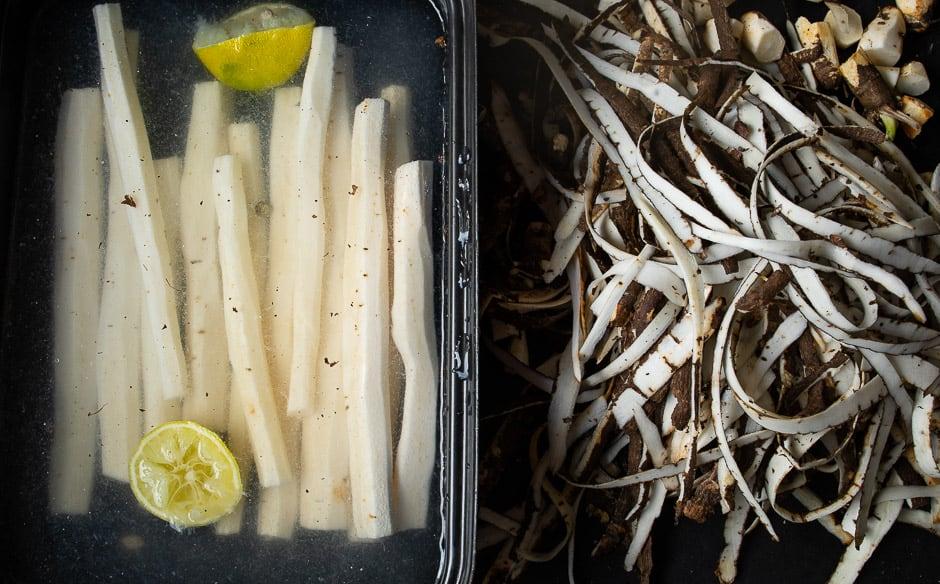 As the cleaned white roots are liable to brown pretty quickly (like a cut apple) Thomas also recommends putting each freshly peeled root into a bowl (or roasting tray) of water with a generous squeeze of lemon juice (other chefs suggest two tablespoons of cider vinegar for the very same effect) to keep them bright and creamy. When a simmering pan of salted water is ready, the salsify can be chopped into 3cm pieces or more finely chopped as Thomas Sixt prefers for many of his recipes. Cook until soft or take out at al dente and move into a non-toxic frying pan with your fave saturated fat as part of a stirfry medley. Salsify mash is also delicious seasoned and oiled. When buying salsify at farmers’ markets or more gourmet grocers/supermarkets, choose firm roots, preferably with the green tops still on. Are you a member of the <1% group who have tried salsify before? I joined only a few days ago and was pleasantly surprised. 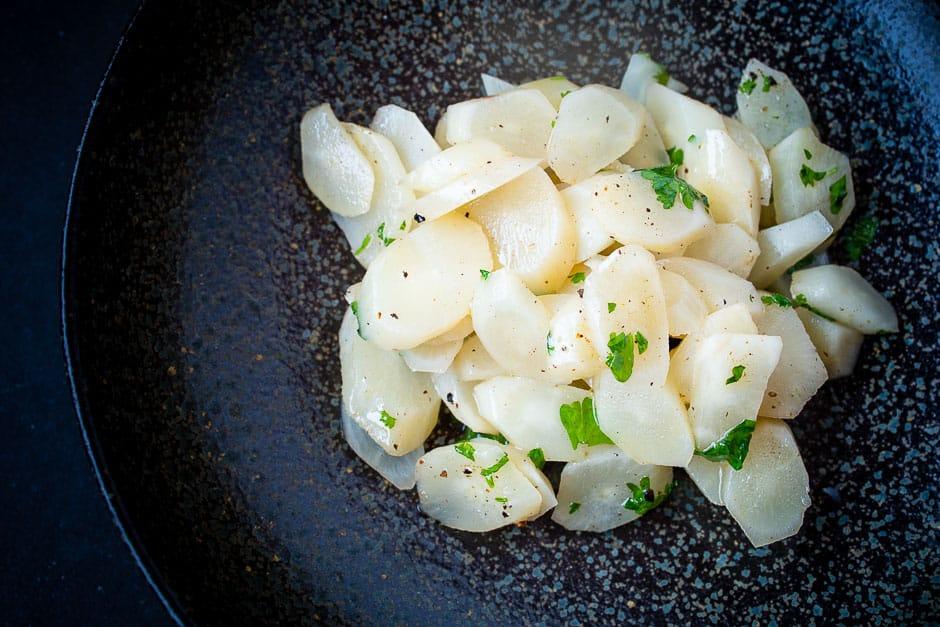