Life Beyond The Coconut 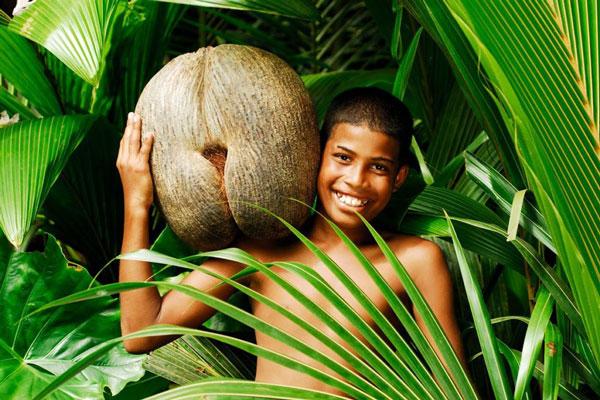 When we think about palm trees most of us think about coconuts. A large proportion even assume that palm and coconuts are synonymous things. The truth however is very different: there are over 2,500 known species of palm, and only one of those species (Cocos nucifera) is coconut. That leaves (oh look a pun) an incredibly large array of non-coconut palm abundance, the progenitors of a startling diversity of fruit goodies, both relatively mainstream and utterly exotic; often both. There is a reason palm tree species are ascribed as “the tree of life” more than any other botanical family. Explore with me, a few of nature’s incredible palm fruit gifts, in a life beyond the coconut.

Coco-de-mer (Lodoicea maldivica)
The Coco-de-mer is the fruit of the Lodoicea palm and is the world’s largest known seed (pictured above). What is so amazing about this rare giant is its exclusivity: it is entirely endemic to only 2 islands of the Seychelles and cannot be found anywhere else in the wild. Because it has been prized for centuries even its natural populations are in short supply and are carefully monitored. Unlike coconuts which can migrate from island to island as floating seed pods, the coco-de-mer is simply too heavy to float and will typically become non-viable and waterlogged in the ocean, before having the chance to bloom in new sands. Though Coco-de-mer palms and their harvests are heavily protected, for a fortunate few islanders able to partake, it is highly revered as food, delicacy and aphrodisiac. If you were ever lucky enough to try it, author Adam Leith Gollner states that Coco-de-mer has a “mild citrus-like quality, refreshing and sweet with earthy, spunky notes. It tastes like coconut flesh, only sexier.” 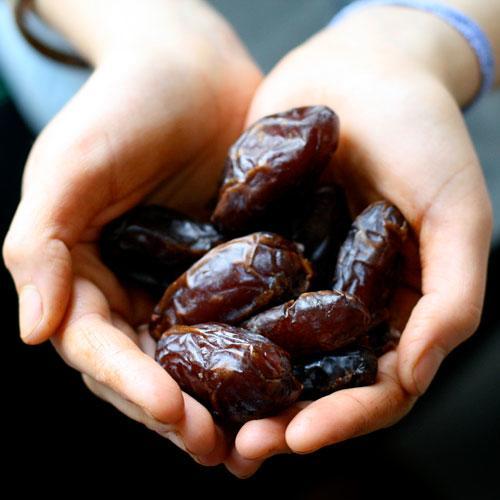 Though there are at least 14 species of Dates within the Phoenix palm genus the most common and widely available species is Phoenix dactylifera – of which the juicy Medjool is probably the most known variety. The fruit of the date palm is one of the World’s oldest known human foods and was one of the first to be domesticated by earlier man’s desire for sweeter, meatier, juicier fruit, all the way back to Ancient Arabia and Mesopotamia. So favoured throughout the world as one of the planet’s most delicious and nutritious “fast foods”, date palms comprise 3% of the Earth’s cultivated surface. Dates truly are incredible solar capturing packets (as their delectable natural sweetness attests) and the ultimate tastiest dates are said to require at least 100 days of 38°C.  Nutritionally speaking fresh tree-ripened (highest moisture content) or further sun-dried tree-ripened dates such as Medjool or Barhi (next highest moisture content) represent the perfect balance between nutritional density and digestibility/tolerability. Unlike most fruits, dates are noted for containing a wide suite of all the most important bone building minerals and will certainly contribute towards bone health when sufficient green foods are also consumed. Even more interestingly, dates have been shown to influence oxytocin receptors, stimulate the uterine muscles to respond more comfortably to oxytocin, and better prepare the uterus and cervix for a happy, health delivery, making them a great pregnancy food. In fact, it would appear that this capacity has been known since ancient times. 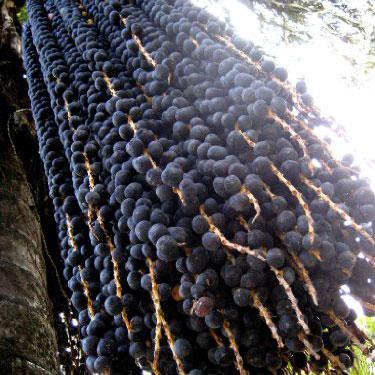 Açaí or Açaí palm fruit is the fruit from a tall palm native to Brazil and Northern South America. It is ranked highly as one of the most popular and nutritious superfoods from the region. The taste is often described as reminiscent of wild berries and chocolate and indeed, like both of those ingredients, Açaí has an extremely high antioxidant ORAC rating. Traditional uses for Açaí fruit has included treatment for diarrhoea, parasitic infections, haemorrhages and ulcers. As a food, Açaí pulp in the tribal Amazon belt is often blended with the starchy root vegetable manioc and eaten as a nutritious porridge. Unlike dates, Açaí is highly perishable and is typically found as a frozen pulp or freeze-dried powder outside of growing areas. Much less known, the Açaí fruit also yields an olive-like oil, though it is relatively expensive as the fruit is only 1% fat by weight. 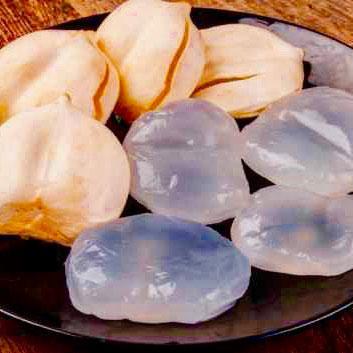 Mark my words, the native Indian Palmyra palm is an incredibly resourceful palm whose products will start to gain a lot traction over here in the West in the coming years. When cut open, the dark-husked Palmyra palm fruit yields some curious treasures known in English as Ice Apples (pictured above). With a consistency similar to lychee and a coconut jelly-like taste, each ice apple packet also contains a mildly sweet liquid famed in India for cooling the body during the hot and humid summer months. During my recent trip to Goa I was able to taste this most interesting fruit for the first time and it certainly made a nice change from our daily young green coconuts. In addition to its fruit, Palmyra palm is famed for its abundant production of sweet sap which is extruded out by making an incision in the flower head at the top of the tree  (a process that can only be conducted through the services of a professional palm tree climber). When the sweet sap is completely  evaporated of its water component, a nutritious unrefined sugar is left behind, a simple carbohydrate source rich in a broad spectrum of minerals and vitamins, especially the vitamin B family, Magnesium & Potassium. 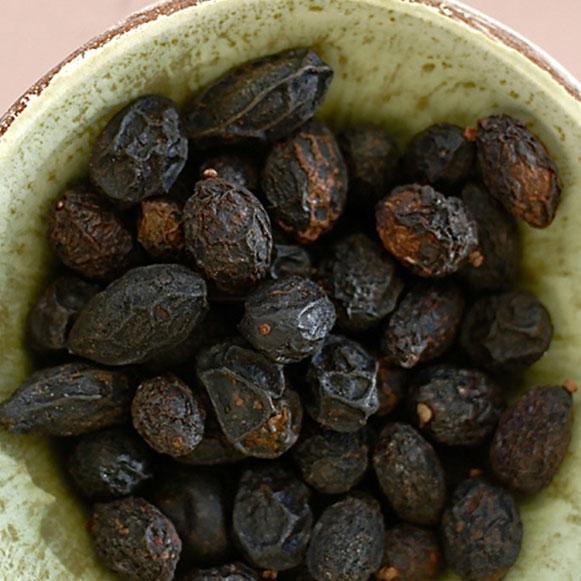 Dried saw palmetto berries (pictured above) could easily be mistaken for a variety of dates right? But their taste couldn’t be anymore different. The berries of the Saw Palmetto palm were described by a group of Quakers shipwrecked on the Florida coast as a cross between rotten cheese and tobacco juice back in 1692. So probably not the first pizza topping that comes to mind, but the First Nations people definitely took to them and they were picked, dried and used year round as a caloric snack and ingredient in variety of other foodstuffs and hot beverages. Saw Palmetto palms are native to South East USA and in Florida approximately 10% of the state is comprised of the abundant palm whose rich scented flowers attract large numbers of bees and the production of a wonderful honey. Saw Palmetto palm berries are a very popular herbal medicine and have actually been imported into Europe for a good 400 years. Saw Palmetto berries have overwhelmingly become synonymous as a male prostate medicine and numerous studies support this relationship, especially related to issues of enlarged prostate, prostate infection and urinary disorders. In both sexes saw palmetto is believed to improve conditions of low libido and infertility as well. 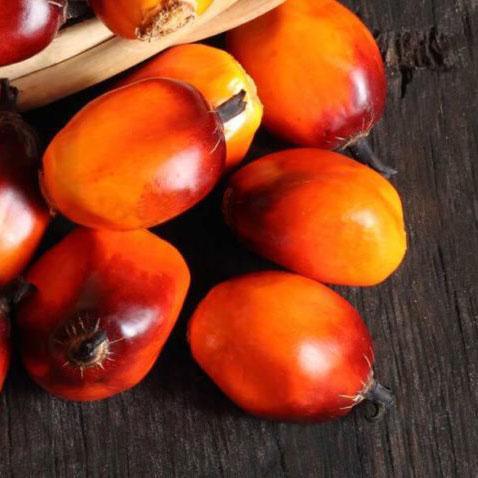 Peach palm fruit is an important starch-rich nutrition staple, both for humans and rainforest animals, native to the jungles of Central and South America. If you have ever spent time in these (mostly Spanish speaking) nations you may have seen them, either growing high up in clusters on the tree, or else for sale in a plethora of markets and supermarkets. In some areas they are used (typically boiled) as a popular ingredient owing to their versatility – much like potatoes or chestnuts are in other parts of the World, and indeed, taste-wise, peach palm fruit can be imagined as a cross between chestnut, a buttery potato and cashews. For my tastebuds, though tasty, they were a little too dry, but locals typically adore them with mayo or sour cream, and so with this in mind, I am sure the fruit becomes considerably more appetising when the fat/protein element is imparted to them. My famous dulse pickle comes to mind as the perfect accompaniment. 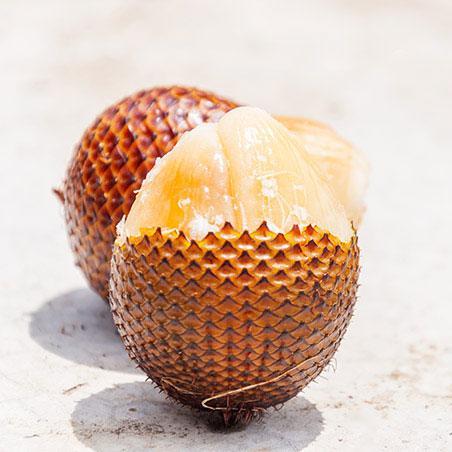 Snake fruit, so named because of its snake-like scaly skin, is a truly exotic palm fruit heralding from South East Asia. A native to the rainforests of Indonesia, Malaysia and Brunei, Snake fruit (also known as Salak) grows in intriguing clusters from the base of the relatively small Salak palm tree. Though levels of sweetness, moisture content and aroma profiles can vary considerably from one variety of the fruit to the next, snake fruit is often described as being mildly-sweet to sweet like honey, apple like in crunch, but having a most curious tanginess, sometimes being labelled as pineapple-ish. The fruit is rich in vitamin C and contains a wide suite of flavonoids and phenolic compounds. Little research has been done on this tree and its fruit, although what has been done suggests that it has potent antioxidant properties. There is much to learn. In Indonesia the fruit is also known as the “fruit of memory” probably (in part at least) due to its high Potassium content. Snake fruit has also been introduced into Queensland, so an enclave of the snake fruit palms (and a concomitant fruit market) is now successfully growing in the “land down under”.